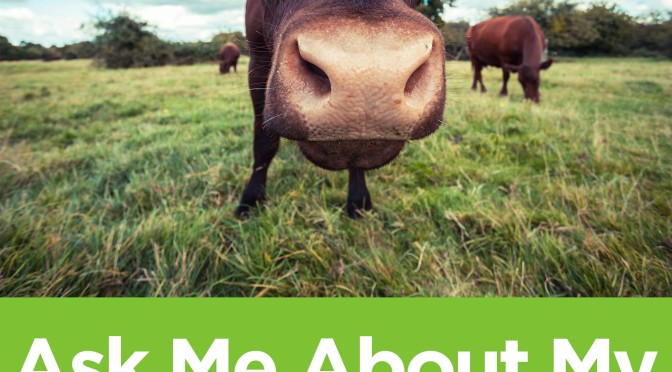 This is a post about fundraising.  And a post about cows.  I never knew the two went together until the Saving Sweet Briar movement.

Allow me to explain.

In the hours after the announcement of closure by the President and Board of Sweet Briar College, students, faculty, staff, alumnae and the community were reeling.   A range of emotions greeted this news from shock to resignation to sadness to anger to passion to advocacy.  Those who saw a future got to work. One brave alumna, Sarah Clement, a former board member, sparked a movement to save the College.  Saving Sweet Briar  was born.

Sarah gathered together other committed alumnae and formed a Board.  I have written about their efforts in several others posts. This post is about fundraising.  And cows.  Because they go together in this case.

In the early days of Saving Sweet Briar – before a website home was established – Facebook and email provided the fertile soil for the germination and later growth of many powerful ideas.

Fundraising in all forms began.  Direct contributions as of this writing surpass $1 million with multi-year commitments over $11 million.

At first these efforts were like the “Wild West” and not tied together; however, leaders emerged and lassoed the organized women and friends of Sweet Briar into groups — some classic to successful fundraising and some not.

I sit on the Major Donor Task Force, a group of professional fundraisers and volunteers with experience.   Beth Ann Trappold Newton recruited me. This is the logical place for me to volunteer since I got my fundraising start at Sweet Briar as a student in 1984 and later after my reunion in 1993 (and Beth Ann helped me get my first job after leaving campus – in fact I took the job she left to have her first baby).  Having helped raise $13M of the $25M campaign at the time, I cannot sit back and watch the President and Board try to spend down endowment given by people I remember and some I still know!  The Major Donor Task Force  reaches out personally to those who have been very generous to Sweet Briar over the years.  We are organized into regional groups and are led by a volunteer, Mary Pope Hutson, and now pro-bono fundraising consulting through Alexander Haas.  Through weekly conference calls and many emails inbetween, we coordinate our efforts.  The response is inspiring.

I had the pleasure of meeting with Evangeline Taylor, a dedicated Sweet Briar alumna, who provides encouragement and support to hundreds of volunteers.

Class representatives provide regular updates to class leaders which they in turn send to their class.

State representatives have reached out personally by phone, email and personal letters to those in their state.

Some, like my classmate, Katie Keogh Widener, do both!

Back to the Cow Challenge…..  It began in the Bedford County Courthouse.  Those of us who could not be in Bedford followed a series of journalists.  Hawes Spencer captured not only the flow of testimony, but his acerbic humor gave those of us working to save Sweet Briar some of the best laughter we had enjoyed in many weeks.

Leader of #SaveSweetBriar group Sarah Clement testifies she'd have reached into her "cow money" had she known of closure risk.

Up until this moment, I didn’t know what “cow money” was.

So what is “cow money” and what is a “Cow Money Challenge”?  I asked and got this answer:  Susan Finn Adams wrote to me, “Sarah ‘ s uncle was a cattle farmer. He left the farm to her family, they later sold it and split the proceeds. Proceeds = “Cow money”.  “Cow Money” is the most precious money you have.  You don’t spend it unless you REALLY need it.

How do you turn “cow money” into gold?  Make it into a challenge of course!  I told you this blog post was inspired by Cows:

Brooke Linville created the “Cow Challenge” with the following post:

Our fearless woman Sarah P. Clement told the court that had she known the condition of the college, she would have reached into her COW MONEY to help. So how much is cow money, we wondered…

As it turns out it is $1642.03 for a bred heifer in 2012. I am sure some of our awesome rancher vixens can help us out if this number is wrong. Anyhow, this is our FUNDRAISING GOAL tonight. We are going to raise us some COW MONEY!

Before the Cow Challenge, there was the “Latte Challenge”.   Hundreds posted photos of themselves holding a cup of coffee (while providing a challenge to Saving Sweet Briar).  This past weekend, there was a challenge around the Kentucky Derby.

Events.  From Washington DC to San Francisco to around the world, events helped alumnae and friends connect and raise needed funds.  At one event in Atlanta, pledges totaling over $600K have matched an initial challenge by Teresa Tomlinson, Sweet Briar alumna and Mayor of Columbus, Georgia.

Meanwhile, back on the web, fundraisers of all kinds continued to grow.  When the going get’s rough….

Clothing.  Sweet Briar Alumnae Goods features something for every corner of your home.  Virtually anyone with a shingle and a heart can make a contribution.  Examples include:  Coffee Table Book, Decals, Luggage, baby clothes, ring dishes, prayer beads, men’s ties….

Home and Garden.   Everything you might need for home, garden and College:  Yard flags, cookbooks,

They Sell That?  Some of the more unusual offerings included “Jamberry” press-on fingernail polish, Tattoos and even bull riding competitions,

As of this writing, alumnae gave the equivalent of multiple cows.  One alumna, Christina Savage Lytle, joked, “Now we are going to need to raise enough for a barn…”

What we have here is a recipe for fundraising success.  We have a recipe for institutional success.  HUNDREDS of volunteers divided thoughtfully into groups by expertise and passion are working hourly, daily, weekly and constantly for Saving Sweet Briar.

This is the most fun I’ve had fundraising in a very long time.  The last time I had this much fun was when I was Reunion Gift Chair for my 25th Reunion.  Before that, calling as a Freshman in 1984 when I literally “dialed for dollars’ (and treats).

This is all without formal records or professional staff.  Imagine what could be done for the future?

P.S.  For a post about “cow money” I would be remiss if I didn’t add a parting comment by an amazing woman (whose name I did not catch) who served in the Marine after Sweet Briar.  On the call with the “President”, Missy Witherow, Interim VP of Development, and Sandra Taylor, member of the Board and President of the Alumnae Association, she said,

We have a term for this kind of behavior in the Marines.  It’s called BULL.  I throw down the “bullsh*t flag” on this behavior leading to this decision.

Stacey Sickels Locke, CFRE, is a proud graduate of Sweet Briar College, Class of 1988.  She served as an employee of the College in the early 1990s working on the $25 million Campaign.  During that time, she solicited many leadership gifts which make up the current endowment and she feels a sense of duty that those donations are not used for the closure of the College or for any other purposes than the donors intended. Since then, she has spent her career building support for higher education and the nonprofit community as a staff member and consultant for boards.  As a volunteer, she has served Sweet Briar since graduation as a fundraiser, admissions ambassador and now advocate for the #saveSweetBriar movement.  She is a member of the Association of Fundraising Professionals (AFP), is affiliated (through the University of Maryland) with the Council for Advancement and Support of Education (CASE) and holds a Certified Fund Raising Executive (CFRE) certification from CFRE International.

This site uses Akismet to reduce spam. Learn how your comment data is processed.